Just 48 hours ahead of his anticipated final outing of a glittering career, the news broke that the high-class So You Think has been retired with immediate effect, having sustained muscle damage in his hind quarters, during a final piece of work ahead of his bid to retain the Group 1 Coral Eclipse Stakes at Sandown, writes Elliot Slater.

The six-year-old had been a top-priced favourite in the best racing odds for the prestigious 10 furlong contest, in which he defeated the previous year’s Epsom Derby winner, Workforce, in tenacious fashion in 2011.

He had appeared to be as good, if not better than ever, when outclassing the opposition in the Prince of Wales’s Stakes at Royal Ascot, last month. The sudden announcement that the son of High Chaparral had run his last race came as a big shock to punters and to the racing industry as a whole.

New Zealand-bred, So You Think won eight of his 12 races in Australia, establishing himself as an outstanding performer between seven and ten furlongs, before putting up possibly his bravest ever effort when carrying a big weight into third in the two-mile Melbourne Cup in 2010.

Purchased by the Coolmore partners to continue his career in Europe, the Aussie star joined Aidan O’Brien at Ballydoyle in March 2011.

He immediately made a big impression, winning three of his first five starts, including the Curragh Cup, the Coral Eclipse Stakes, and the Irish Champion Stakes, whilst also running a stormer when narrowly beaten by Rewilding in a pulsating finish to the Prince of Wales’s Stakes.

Fourth in the Prix de l’Arc de Triomphe, and second in the Qipco Champion Stakes at Ascot, at the end of last term, So You Think had won both his starts this term, after finishing fourth in the Dubai World Cup in March.

He is now expected to take up stallion duties in Australia within the next few months. Race-goers who had been hoping to gamble on So You Think, this summer, should check out the horse racing betting page on Bet365 for other options. 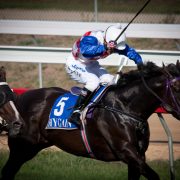 Kinetica In Favour Of Sandringham Handicap

The July Cup
Scroll to top