It seems a little strange to be talking of the 2011 Cheltenham Festival with the final classic of the Flat season not yet upon us, but a long-range plan hatched by one of the shrewdest men in the business is always worthy of note and, when outstanding Irish trainer Willie Mullins is the man in question, even more so, writes Elliot Slater.

Mullins revealed last week that, although many people have suggested that his tremendous mare Quevega, winner of the last two renewals of the Grade 2 David Nicholson Mares’ Hurdle at the Cheltenham Festival, should be given a chance to take on the boys and mix it in the coming season’s Champion Hurdle, or even the World Hurdle, his inclination is to head back for the mares’ race and attempt to land an unprecedented hattrick of Festival victories that would secure Quevega a place in Cheltenham folklore.

Six-year-old Quevega, a winner of nine of her 16 career starts, got the better of a fine race with Carole’s Legacy at Cheltenham in the spring, before going on to land the Grade 1 Ladbrokes.com World Series Hurdle at Punchestown in April, beating Bensalem by three lengths. A year earlier she had trounced her Cheltenham rivals when bounding away unchallenged to beat the smart United by no less than 14 lengths.

It looks very much as though Mullins plans to tread a similar path once again with the French-bred mare, who will be brought along steadily and might only have one outing before her return to visit to Prestbury Park in March.

Having justified favouritism in the horse betting odds and lined the pockets of Irish punters for each of the last two years, it seems that once again Quevega will be one of the hottest Irish bankers of the whole meeting ? even at this stage, so long before the actual race itself. 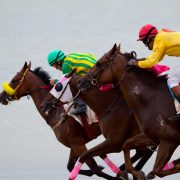