Trainer Nicky Richards is still gravely concerned over the welfare of Monet’s Garden, who remains critically ill with a foot infection.

The popular steeplechaser is fighting for his life after the infection was found to have spread to the bone is in his hoof. The problem was found after Monet’s Garden romped to victory in the Old Roan Chase at Aintree in October. Richards confirmed the galloping grey has run his last race – and his concern now lies entirely with the welfare of the horse.

Richards said: “The old horse is battling away for his life. Regarding his racing career though, that’s over. We are just trying to save the old horse now, he’s still at the vets.”

Hopes for the three-time Grade One winner were fading last night as Richards assessed his chances of survival as less than 50%. His bold jumping style won the hearts of racing fan’s as he famously pipped Kauto Star, considered the finest steeple chaser in the last forty years, to score his first Roan Chase win in 2007. The crowd favourite, who earned more than £680,000 pounds in prize money in his 32 race, was found to be lame after winning at Aintree , and turned 13 on New Year’s Day.

Monet’s Garden was often perceived as a horse who struggled at horse racing’s most famous meet and often suffered from long Cheltenham odds, but the man who owned him throughout his illustrious career, David Yates, believed he actually enjoyed the challenge. Yates said: “Everybody said he didn’t like Cheltenham but it was actually the overnight stopovers he didn’t like. Because of that we used to take him down on the day to the likes of Ascot”. 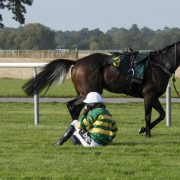