The eagerly anticipated Cheltenham festival in March looks as though it could once again prove to be a benefit for champion trainer Paul Nicholls, such is the strength in depth of the Ditcheat handler in all divisions. Nicholls’ Ghizao looks the one they all have to beat in the Irish Independent Arkle Chase, a race for which he is currently the solid ante-post favourite, writes Elliot Slater.

A decent novice hurdler last term finishing a length runner-up to the now sidelined General Miller at Cheltenham in December, Ghizao went on to win in fine style at Taunton next time out and duly took his chance in the Neptune Investment Management Novices’ Hurdle at the Cheltenham Festival last March. The race never panned out for him after being hampered at an early stage, and he trailed home a well beaten 12th behind the impressive Donald McCain-trained Peddlers Cross.

A beaten cheltenham odds favourite when finishing second on his chasing bow at Cheltenham in October, the seven-year-old duly returned to Prestbury Park a month later and put up an impressive display in slamming Captain Chris by 10 lengths. His subsequent victory over the same horse at Newbury when meeting that rival on 10lbs worse terms a month later, signalled that Ghizao is a very progressive horse. Bookmakers were quick to react by installing him as favourite for the Arkle Chase.

Timmy Murphy, who rode Ghizao to victory on that most recent start, returned to the winners’ enclosure to tell owners Andy Stewart and David Johnson that there is even more improvement to come. Connections immediately took the decision to give the horse a break before planning to bring him back fresh and well for the big event on the opening day of the four-day National Hunt showpiece. 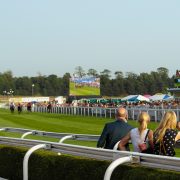